CONGRATULATIONS to our author Kameel Ahmady & IRIN, new member of the IAC 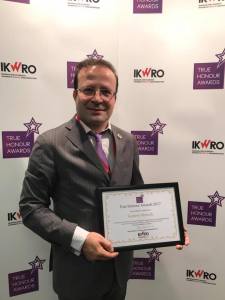 On February 6, 1984, representatives of 26 African nations  met in Dakar to answer a call that had emerged in the 1970s. Local leadership was needed to end the scourge of female genital mutilation. Thus, the Inter-African Committee (IAC) was born. In 1985 with an impressive series of presentations at the U.N. End-of-Decade for Women conference in Nairobi, the non-profit took its place at the helm of international advocacy to stop FGM.

The IAC describes its objectives as, first, to “prevent and eliminate traditional practices that are harmful to or impede the health, human development and rights of women and girls and advocate for care for those who suffer the health consequences.” It also wishes “to promote and  support those traditional practices that improve and contribute to … [females’] health, human development and rights.” [1] In a commanding film from 1991 produced by Dr. Irene Thomas with the Nigerian section of the IAC, you find founding president Berhane Ras-Work advocating for baby massage and breast-feeding, unquestionably good child-rearing customs. In contrast, ritual amputation of girls’ genitalia — which the IAC insists be properly named as female genital mutilation [2] — should be rigorously opposed.

From its headquarters in Addis Ababa and liaison office in Geneva, the Inter-African Committee unites chapters in 29 African nations while linking to Diaspora populations through affiliates in Belgium, France, the UK, Spain, Germany, Sweden, Norway, Italy, Canada, USA, New Zealand, Japan — and now also in IRAN.

16 June, the International Day of the African Child, offers ample motivation to celebrate not the discovery of yet another venue in the world where FGM occurs but of our ability to bring it out into the open and to welcome a voice for change. Yes, advances in communication make the ubiquity of genital maiming increasingly evident. Did you know, for instance, that Dagestan and Colombia, not exactly next-door neighbors, are among recent additions to the list along with Iran, Iraq, India, Indonesia, and Malaysia? What’s good in all this is the rise of resistance and a growing awareness that FGM is itself a symptom, not of local animosity to female genitalia, but of global negativity inherent in a patriarchal order.

And most welcome are the men putting their own convenience and well-being on the line, risking the backlash of peers and governments in standing up for women and girls. Kameel Ahmady has done this in his book with UnCUT/VOICES Press and a second study on early and child marriage.

Congratulations to the IAC for acquiring such a noble ally and to Kameel Ahmady for unflinching effort to create a safer and more just world for girls.

On 10 October 2016, we celebrated the launch of Kameel Ahmady’s book at Lady Margaret Hall, University of Oxford, sponsored by the International Gender Studies Centre and UnCUT/VOICES Press. The book was also hailed by The Guardian. https://www.theguardian.com/world/2015/jun/04/female-genital-mutilation-iran-fgm

Excerpts on the history and epidemiology of FGM from Kameel Ahmady. In the Name of Tradition. Female Genital Mutilation in Iran. AfterWords Tobe Levin and Hilary Burrage.  (UnCUT/VOICESS Press, 2016).

Despite considerable research by historians and anthropologists, the historical roots of FGM remain unknown. Several sources that have traced it back more than 2000 years generally point to ancient Egypt, specifically around the Nile, as the geographic heartland of its spread.

More precisely, several historians claim it to be a Pharaonic practice dating from the 5th century BC. “Pharaonic circumcision,” an expression prevalent in popular discourse, is sometimes considered as proof of the claim. Several researchers suggest that the early Egyptians infibulated women to prevent pregnancy, especially among slaves. Others mention the practice as an African Stone Age method of “protecting” young females from rape (Lightfoot-Klein, 1983; Iweulmor and Veney, 2006). Early Roman and Arabic civilisations linked FGM to virginity and chastity; in ancient Rome female captives were subjected to it to repress sexual activity and to raise their market value (Iweulmor and Veney, 2006).

Despite its obscure origins, FGM extended throughout the world where it can be found to this day. Not limited to Africa and the Middle East, ablation of female genitalia was performed by Australian Aboriginal communities, the Phoenicians, the Hittites, the Ethiopians, and ethnic groups in Amazonia, some parts of India, Pakistan, Malaysia, and Indonesia as well as in the Philippines. As late as the 19th and into the twentieth century, FGM was also known in Europe and the US, where some physicians prescribed clitoridectomy to prevent masturbation or counteract female homosexuality and some mental disorders such as hysteria (Brown, 1866). In fact, FGM sporadically continued in the USA until the 1970s in one form or another. (Pulitzer prize-winning novelist Alice Walker included FGM performed on US soil in her pioneering novel against female mutilation, Possessing the Secret of Joy [1992].)

UNICEF confirms that FGM is most common in 29 countries in Africa as well as in some nations in Asia and the Middle East. No evidence exists for it as indigenous to southern Africa or in the Arabic-speaking nations of North Africa, except Egypt. Increased migration from practising nations, however, has brought FGM to other parts of the world including Australia, Canada, New Zealand, the US, and Europe (Boyle and Preves, 2000). To a lesser extent, clitoridectomy continues to occur in Indonesia, Malaysia, Pakistan, India, Iraq and Iran as this research will show.

In Iraq, Sunni Kurds, some Arabs and Turkmens subject girls to the blade. A 2005 survey by a German NGO suggests 60% FGM prevalence among Kurds in Iraq (Ghareeb and Dougherty, 2004, 226). Later studies from the same area, however, following the launch of local and regional campaigns, show a lower figure, suggesting success. According to the Kurdish regional government, UNICEF and local NGOs, FGM rates have indeed been going down (UNICEF, 2014).

Reliable data on the prevalence of FGM is increasingly available. The statistical review by UNICEF mentions that national numbers have now been collected in the Demographic and Health Surveys (DHS) for six countries: the Central African Republic, Côte d’Ivoire, Egypt, Eritrea, Mali and Sudan. In these nations, the rate among reproductive-age women varies from 43% to 97%. The data also subdivides rates among different ethnic groups. However, the statistics are silent about its presence in the US and a few other western nations …. Iraq, at 8%, has amongst the lowest rates of FGM (UNICEF, 2013).  Nonetheless, that nation has now found its place on the list.”

This entry was posted in Uncategorized. Bookmark the permalink.